Introduction: You guys know I spent my vacation camping and climbing mountains. I have to say I loved it – I thoroughly enjoyed it. Lisa camped with me and she was a real trouper. I had planned to put up a picture here of the view she had from her chair as she did her quilting and listened to music, but when I went to get it, I found I didn’t have it. It is on her phone. Anyway, she has some good pics of our campsite and the surrounding beauty of the mountains.

I saw some beautiful country and spent some time in prayer. I was afraid a couple of times. Well, more than a couple of times. I was only in danger – real danger that I know of, on Missouri Mountain. There is a certain kind of ‘fear’ I feel when I climb. Sometimes I think it has to do with the altitude more than a genuine fear. There are inherent risks one takes when climbing mountains. But, I want you to know that I do my best to carry everything I’ll need in case of an emergency. The army trained me well to be able to survive out in the wilderness if something were to go wrong. And I would hope that I could put that training to use if it were ever needed.

When climbing a mountain, you want to research everything as much as possible. The truth is that there are some mountains to climb that are harder than others. Each mountain has its own problems. When climbing there is instability. Sometimes footing is hard. Sometimes you have to use your hands for some extra stability. Sometimes, climbers take the mountain foolishly and end up getting hurt. Sometimes accidents happen. When I had finished my last mountain, I was dropping below the summit and came across a climber who had fallen and blown out his knee. He was lucky to have a person climbing that morning who was a part of a rescue squad and about 20 other people around willing to help. She knew just what to do. Later on, as I continued my descent, I videoed the helicopter making its way to the saddle, just below the summit to pick him up.

I want to talk with you this morning about a mountain where one can feel stable and secure.

Turn with me to Psalm 125. Let’s read the text together. I’ll read and you follow along in your copy of God’s Word. Let’s all stand together as we read the Word of the Lord together.

The Lord Surrounds His People

1         Those who trust in the Lord are like Mount Zion, which cannot be moved, but abides forever.

2         As the mountains surround Jerusalem, so the Lord surrounds his people, from this time forth and forevermore.

3         For the scepter of wickedness shall not rest on the land allotted to the righteous, lest the righteous stretch out their hands to do wrong.

5         But those who turn aside to their crooked ways the Lord will lead away with evildoers!

Peace be upon Israel!

Prayer; thank you, you may be seated.

Normally, the ESV gives some natural separation to the divisions in the text, making it easier for the reader to identify. But, as we see this morning in the text of Psalm 125 – there aren’t any. But I think there are – at least that is how I’ve divided the text up:

Look at v 1 with me again: 1 Those who trust in the Lord are like Mount Zion, which cannot be moved, but abides forever. What a statement!

You probably remember the context of these Psalms of Ascent. These were sung or chanted maybe by the pilgrims, as they would make their way to Jerusalem and around Jerusalem as they made their way to the Temple for Worship. Standing in Jerusalem you can see the other mountains around her. rd v 2; As the mountains surround Jerusalem, so the Lord surrounds his people, from this time forth and forevermore.

Goldingay writes: There is a particular strength about Mount Zion, constituting as it does a thumb-shaped crest with steep slopes on three sides. But the Temple Mount isn’t the highest summit in the Jerusalem area. It’s probably the lowest. There are other summits that rise up around it.

Standing on the mount in Jerusalem, which feels secure in itself, one can look to these surrounding mountains and feel even greater security and stability. Allen concludes: To the eye of faith these mountains became a symbol of Yahweh’s everlasting protection.

The language here in Psalm 125 is what we call a simile. Those who trust in God are ‘like’ Mount Zion.

The point the writer is making is that his trust isn’t in the mountain of God itself, but rather in Yahweh (see all caps, i.e., Lord).

And there is good reason for this. In 2 Samuel 5, the text tells us that David ruled at Hebron for 71/2 years and then moved the capital to Jerusalem. But, taking Jerusalem wasn’t easy. Even the inhabitants (the Jebusites) thought they were safe from David. Rd 2 Sam 5.6: 6 And the king and his men went to Jerusalem against the Jebusites, the inhabitants of the land, who said to David, “You will not come in here, but the blind and the lame will ward you off”—thinking, “David cannot come in here.”

The inhabitants of Jerusalem felt so secure, that they believed they could post the blind and the lame as guards and still be safe! But guess what, Jerusalem fell to David, and of course, it became known as the City of David. David knew it was secure, not because of its position and situation in the midst of other mountains. It was secure because God made it secure. And the writer of Psalm 125 echoes that thought: 1 Those who trust in the Lord are like Mount Zion, which cannot be moved, but abides forever. 2 As the mountains surround Jerusalem, so the Lord surrounds his people, from this time forth and forevermore.

Something then happens in v3, which causes the reader to pause: 3 For the scepter of wickedness shall not rest on the land allotted to the righteous, lest the righteous stretch out their hands to do wrong. Sometimes, people don’t put their faith in Yahweh. Sometimes, they put their faith in the government that rules them. Some trust in the scepter that rules over them. Here is a warning to those who would and a statement that God will not allow that to continue forever.

I think this is the principle being taught: if wickedness is allowed to rule over God’s people, then eventually God’s people will become wicked in their behavior.

Historically, and in context with the passage, from 600 BC onward, there is a foreign presence in Israel. It isn’t a Jewish King that rules – it isn’t someone from the House of David. And, foreigners in the land bring a presence of sin that permeates the people and influences their culture and their practices.

As an example, just look at the disciples. You have a variety of men who represent different aspects of their culture. Consider Levi or Matthew. What was his occupation? He worked for Rome – a tax collector. Many, who saw Roman occupation as evil, would have hated him. Consider John, who was close enough to the Chief priest and his family that he was able to get Peter into the inner court to see what was going on with Jesus on the night he was betrayed.

If wickedness is allowed to rule over God’s people, then eventually God’s people will become wicked in their behavior. That outside presence of wickedness eventually influences God’s people. But, the psalmist believes that God isn’t going to allow that to happen. And that is his prayer; rd v 4-5;

Some scholars see a type of poetic structure in these last three verses:

This structure would be a smaller structure to the overall structure of an Emphasis on Yahweh, which has Yahweh in v1&2 and again in v4&5.

What is the Psalmist saying? What is his emphasis? It is the importance of faith and trust in God. His first sentence here would be a perfect thesis statement: Those who trust in the Lord (Yahweh) are like Mount Zion, which cannot be moved, but abides forever.

Placing your Trust in God brings stability and security. Allowing outside influences in your life will be destructive. So, pray. Pray that God will remove those who desire and practice wickedness. Pray that God would bless those whose lives have been changed by him: those who (internally) are upright in their hearts and (externally) practice holiness to the best of their ability.

But just how does that impact our lives? Is the Psalm 125, an OT passage, applicable to the church? Yes!

Here is how I would outline this passage for the church:

A 4th point might be Pray! Pray for the Church (you see that in verses 4-5). But, I think I’ll make that my application.

After my vacation and visit to Colorado, I now have 27 summits. After all of the talk of mountains and hikes and storms and fears, you’d probably think that the mountains were my main motivation.

Can I show you a picture? 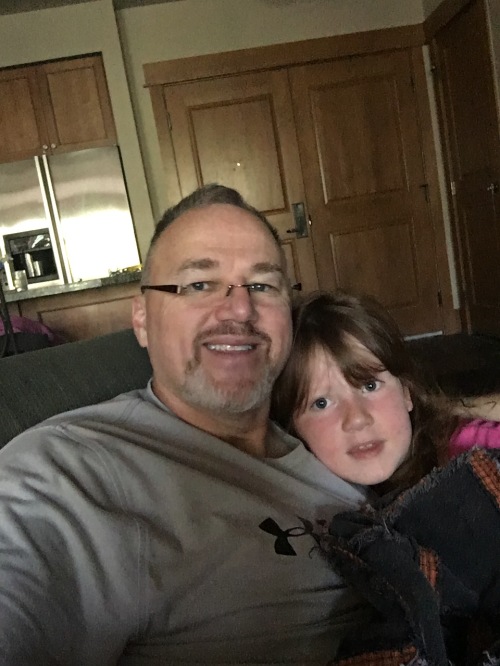 If you don’t have a relationship with God through his Son Jesus, let me tell you how you can.

In a moment we’ll be dismissed. We’ll gather in the back for some coffee, cookies, and doughnuts. Come and talk with me or Duffey, or one of the elders. We’d love to visit with you about what it means to give your life to Christ – to know and have that security and that stability that comes through a relationship with him.

Maybe, you’ve got another decision on your heart: